Copper Stands Up as a True, Germ-fighting Superhero 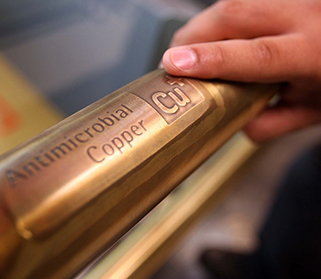 March 31, 2020 - There’s the good, there’s the great and then there is the Greatest Of All Time. It has been difficult to even mention silver linings during the global outbreak of the COVID-19 virus, but Freeport-McMoRan employees are part of one, because they help produce the greatest virus crime fighter of all time.

Really. You could even call copper COVID-19’s mortal enemy. The proof? How about 500 copper alloys registered by the U.S. Environmental Protection Agency as antimicrobial public health materials.

Copper is the undisputed antimicrobial Greatest of All Time, a fact more important than ever considering the COVID-19 pandemic along with increasingly resistant microbial pathogens. This isn’t anything new, as 5,000 years ago Egyptians realized water kept in copper urns tasted a lot less funky than water stored in other kinds of vessels.

Copper, on the other hand, kills microbes and bacteria wet or dry and also kills them faster than other metals regardless of moisture level. That’s because copper is much like those martial arts masters from the old action movies who were so adept that their hands and feet were registered as lethal weapons.

Copper has five moves that strike fear into the hearts of germs, bugs, worms and fungi, the most powerful of which is the mule kick we know as rust.

So, this enemy microbe, say a virus, lands in droplets on a surface made of copper or copper alloy. In the first line of attack, the antimicrobial metal breaks through the cell walls using the same process that makes metals rust when they react with water.

Metals oxidize, or rust, because their atomic nature allows them to steal electrons from things like the cell walls of microbes.

While other metals are a little finicky and only want a certain number of electrons, the red metal crashes an electron party of two or three with no hesitation. Copper’s oxidizing atoms steal electrons from the walls of the microbe and its supply of oxygen and proteins.

Once the walls have been breached, copper deploys three new weapons that:

As if that wasn’t enough, the fifth and final barrage sends those crazy, curious little things known as free radicals everywhere.

These molecules of oxygen and hydrogen born from the chaotic electron battle do their little free-radical freak-out stealing their own electrons and setting off all kinds of calamities in the cellular composition of the offending microbe.

A Matter of Time

Turnabout is fair play, and how copper defeats microbes and bacteria is not all that different from the plan of attack the viruses and bacteria take in spreading in the first place.

For more than a few germs, copper’s power to defeat microbes is quick and darn-near instantaneous. That’s why the fact that the COVID-19 virus can survive on a copper surface for four hours should help people understand why hygiene and social distancing are so important.

And if four hours seems like a long time, consider how long COVID-19 is detectable in gasses and on surfaces: