The PTFI project area is located on the southern flanks of the Jayawijaya Mountains, located in the Mimika Regency of the Province of Papua. PTFI’s mining area (10,500 hectares) is located between 2,700 meters and 4,200 meters above sea level (ASL) and includes the Grasberg open-pit mine, an underground mining complex, a milling complex and extensive supporting infrastructure. The ecosystems in the mining area (2,700 meters – 4,200 meters ASL) range from upper montane forest subzone to alpine zone. The broader project area (289,500 hectares) extends from the mining area at about 2,700 meters ASL down to the Arafura Sea to the south.

Due to its location in one of the world’s richest biodiversity regions, the PTFI project area contains considerable biodiversity. PTFI conducts ongoing biodiversity inventories to inform its biodiversity management program, including approaches for in situ conservation of biodiversity; the long-term monitoring of mine related impacts on biodiversity; and the rehabilitation and restoration of disturbed areas using principles of restoration ecology.

Through its Biodiversity Action Plans, PTFI aims to:

Biodiversity in the PTFI project area has been inevitably impacted to varying degrees by mine development activities. These include mining activities in the subalpine zone, tailings management areas in the lowland zone, the mill and Tembagapura town site in the montane zone, and associated infrastructure from the port site to the mine site (approximately nine percent of the project area is disturbed). Most of the area is still the primary forest that is composed of different ecosystems, ranging from mangrove forest, freshwater swamp forest, lowland tropical rain forest, heath forest and montane forest. These transitions from one ecosystem to the next closely mirror changes in elevational gradient.

Biodiversity research on Papua is very limited. Most research and publications that exist focus on Papua New Guinea. PTFI is aware of the lack of biodiversity information in Papua as well as the fact that the project area is a large and rich untapped biodiversity resource. As such, PTFI has offered the area in which it operates as a natural laboratory that can be studied by scientists.

Approximately 90 percent of the PTFI area is composed of different natural ecosystems, including mangrove forest, freshwater swamp forest, lowland tropical rain forest, heath forest, montane forest, and subalpine and alpine zones. Since 1994, PTFI has invited subject matter experts from various institutions within and outside Indonesia to conduct research on biodiversity. A series of ecological studies conducted by PTFI consisted of plants, mammals, birds, amphibians, freshwater fisheries resources, aquatic insects and terrestrial insects. This research has revealed many new species – ranging from aquatic biota to plants and terrestrial fauna – such as 20 new species of crabs, 45 new species of aquatic insects, five new species and one new genera of terrestrial insects, 17 unconfirmed mammals species, 20 potential new frog species, and one new taxa, one new genera and 28 new species of plants. Currently, PTFI has more than 300 reference collection specimens of fish, 200 specimens of crustaceans, 30 specimens of mollusks and approximately 5,000 herbarium specimens. PTFI delivered a set of the specimens to both Indonesian and overseas museums for their collection. Most of this information is directly applicable to the ecosystem of the Lorentz.

Recent studies in the PTFI mining area in 2016 and 2018 encountered a healthy population of the elusive and mysterious New Guinea Singing Dog. Results of tissue analysis indicate this population is different and separate from other known dog populations and may be the oldest known dog species. These studies were conducted in cooperation with The State University of Papua (UNIPA), Cenderawasih University (UNCEN) in Papua and the Southwest Pacific Research Project in the USA.

To support the exploration of biodiversity in Papua, PTFI has established permanent monitoring sites in all ecosystems in the area, from the mine at about 4,000 meters above sea level to the coastal and marine areas. Regular flora and fauna biodiversity monitoring are conducted in those sites involving consultants, research organizations and universities. 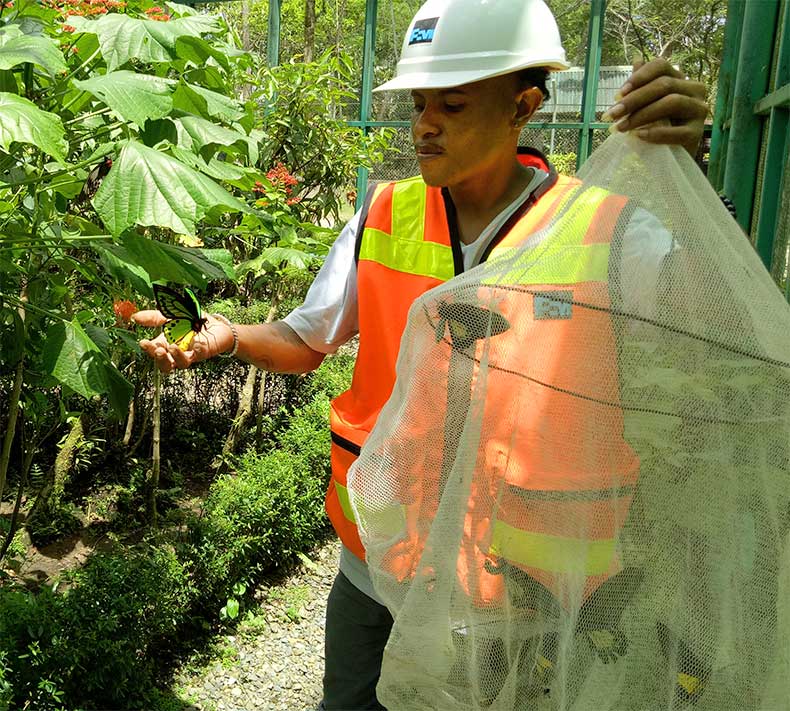 PTFI recognizes the uniqueness of the ecosystems and habitats in which it operates. As part of its environmental commitment, PTFI looks for varied and creative ways to implement biodiversity outreach programs that involve engagements with students, teachers and community to promote biodiversity and endemism in Papua. Some of the programs are as follows:

Some awards and recognitions were obtained by PTFI for its biodiversity programs, including the following:

Papua has one of the world’s highest levels of biodiversity and greatest concentrations of endemic flora and fauna. As a consequence, flora and fauna from Papua often become the object of illegal trade. Countering illegal wildlife trade is a priority for Papua’s natural resource agencies and part of PTFI’s commitment to biodiversity conservation in Papua.

PTFI also participated in a Multi-Stakeholder Forum (MSF) of Environmental Sustainable Development specifically for Wildlife Conservation in Mimika. The forum consists of multiple parties, such as government bodies, NGOs, individuals and others private companies in Mimika. The purpose of the forum is to reduce animal smuggling and increase awareness by producing promotional media (leaflets, banners, posters, social media, etc.), arrange workshops and training, and conduct animal repatriation programs.

4. Re-vegetation and Restoration of Ajkwa and Waii Islands in the Ajkwa Estuary

Sedimentation in the estuaries of the southern part of Papua, especially in the Mimika Regency, is very high due to high rainfall and associated erosion in the region. In the course of PTFI’s operations, natural sedimentation in Ajkwa estuary has inter-mixed with the fraction of tailings not deposited in the ModADA, moving down river to form new islands in the estuary: Ajkwa Island and Waii Island. Ajkwa Island began developing in 1997. Since then, unassisted natural succession has begun to transform the island from a previously barren landform into a mangrove ecosystem. As there is a lack of information about natural successional processes that create estuarine habitats in this region, PTFI conducts long-term monitoring to track ecosystem succession. The monitoring program conducted on Ajkwa Island includes invertebrate species.

In order to accelerate mangrove colonization, assisted mangrove colonization programs have been implemented since 2002. Through 2017, approximately 130 hectares of newly formed land (Waii Island), Yamaima and Pasir Hitam have been revegetated with mangroves – achieving a survival rate greater than 90 percent.

5. Reclamation and Restoration of Subalpine Ecosystems at Grasberg

The Grasberg open-pit mine is at an elevation of more than 4,000 meters above sea level. At this elevation, the ecosystem is devoid of trees and instead dominated by grasses along with some ferns, herbs and shrubs. During the life of the Grasberg open pit, overburden rock will be moved to expose ore for mining. Overburden is placed in stockpiles surrounding the pit. When the individual stockpiles reach their overburden storage capacity, the surfaces can be re-vegetated to form an ecosystem similar to that found during pre-mining conditions. PTFI reclaims the overburden stockpile areas once the final elevation and contour are attained and drainage and erosion control systems are operational. PTFI also implements research to study re-vegetation techniques in subalpine and alpine ecosystems, propagates flora using a large variety of native plants and establishes vermi-composting to support reclamation and ecosystem restoration efforts. Since 1999, 378 hectares of overburden stockpile areas have been reclaimed in Grasberg by using native plant species.

Replanting trees with large biomass per unit land area and protecting large areas of intact forest are some of the most efficient ways to absorb excess CO2 from the atmosphere. PTFI recognizes the importance of reforestation and has committed to incorporating tropical tree planting efforts into its conservation activities. The reforestation initiative in the project area consists of encouraging employees and their families to be actively involved in tree planting activities. PTFI implements reforestation efforts with involvement by local communities though commemorating events such as Earth Day, Environment Day and Indonesia Independence Day as well as religious ceremonies. PTFI’s activities outside the project area include participating or sponsoring tree planting activities in Timika, Papua, and in other areas outside the province of Papua (including West Sumatra, West Java and Central Java).

PHOTO DESCRIPTION: PTFI has constructed multiple environmental education facilities within its tailings reclamation and demonstration area, including a large butterfly sanctuary. Multiple important species are nurtured within while being protected from predators before their release into the surrounding habitats of the lowlands.