July 16, 2021 - Nearly seven weeks after the 150-acre Spur Fire ripped through Bagdad and reduced multiple homes to rubble, Freeport-McMoRan is moving swiftly to replace company homes lost in the blaze to expedite recovery efforts, even as scars remain fresh for many.

Stories of pandemonium around the May 27 event are many: residents frantically banging on doors to evacuate neighbors as flames barreled down on their own homes and company water tankers dousing homes to keep flames at bay – all occurring as firefighters and air tankers battled the blaze from the ground and sky.

Some fled with only the clothes on their backs, while others were afforded precious minutes to gather whatever belongings and important papers they could find. Yet, despite losing everything, those impacted by the fast-moving wildfire have found comfort in the ongoing support of neighbors, Freeport-McMoRan employees around the globe and complete strangers from afar.

“It’s truly incredible,” said Justin Cross, General Manager-Bagdad. “The amount of support that this community has had for its people is really rare in the world today. When push comes to shove and there’s a need, it’s unbelievable how people just stepped up. It’s inspiring.”

Even as the close-knit, remote Arizona mining town finds its new normal, the company is moving forward with a $4.5 million plan to rebuild company houses lost in the fire. Demolition of the first houses started this month.

“The decision was made pretty quickly to rebuild the homes,” said Jennifer Thompson, Controller-Finance / Accounting / Tax in Bagdad.

Meanwhile, four families opted to be relocated into available housing while others were willing to wait for their homes to be rebuilt.

“The quickness of this project is a testament to the dedication of our company’s leadership, who didn’t hesitate when it came to ‘let’s help our people,’” said Michael Hulse, SX/EW and Engineering Manager-Bagdad who is overseeing the reconstruction. “We have a ton of support from everyone looking to take care of our people, and everyone is doing what they can to help.”

‘Looking at your house in the rearview mirror’

The Spur Fire broke out around 2:30 p.m. May 27 after road maintenance equipment accidently ignited tinder dry brush near the town’s wastewater treatment plant, according to the Yavapai County Sheriff’s Office. High winds quickly pushed the fire northwest toward the local baseball field and into a dry wash overgrown with brush.

Soon after, Jeff Loll II, Shovel / Drill Diagnostic Mechanic-Bagdad, received a text from his wife Becky that included a video showing a fire burning southeast of their home. She began packing and prepared to flee the house with their five children, ranging from 3 to 14 years old.

“I pulled into my street and traffic was crazy – people are running around all over,” Loll said. “I could see the fire across the street from my house, and in that moment, it didn’t hit me that anything would happen because there was a road it would still have to cross.”

Along with their children, two dogs, clothes and a file of important documents, they fled their home. In short order, the fire crossed Lindahl Road and barreled northwest onto their street. Loll’s Poplar Court home was one of the first to go.

On the way out of town, Loll glanced over at his neighborhood and could see houses aflame. Loll and his family went to his uncle’s home in Chino Valley, north of Prescott, to wait out the fire. Loll went to Walmart to purchase some clothes when a stranger showed him a YouTube video of one of the homes burning.

“That’s my house,” he recalled telling the stranger.

The ordeal was similar for David Shiflett and his wife, Christine, who also lost their home on Poplar Court in the fire. Shiflett, Electrical Instrumentation Superintendent-Bagdad who also serves on the site’s Crisis Management Team, was heading in to help with fire coordination when flames broke out.

“My intention was to go to the Crisis Management Team to help take care of the emergency, but as I came out, I saw my house was in the line of the fire,” Shiflett said. “I pulled into my driveway, started the sprinkler and threw it over my back fence to try to wet everything down.”

As the family was gathering what belongings they could, the fire crept into their backyard.

“I tried to stomp it out,” said Shiflett, who had lived in the home for 22 years. “I didn’t even have time to get stuff out of my room. I left with the clothes I had on. My wife had collected photos and other items from when her parents passed, and it’s all gone. There’s nothing left. Looking at your house in the rearview mirror as you’re pulling away is pretty heartbreaking.”

Shiflett and his wife then drove to pick up his brother-in-law and mother-in-law before leaving town for Prescott, where the company had made lodging arrangements for evacuees.

Pat Murphy, Mobile Crane Operator-Bagdad, was working on the tailings impoundment at the mine when he learned of the fire.

“One of the maintenance guys and I went up to Cell Tower Hill to get a better view. I could see the whole town below us,” Murphy said. He phoned his wife, who was asleep at the time. She phoned back 15 minutes later, telling him the fire was now approaching their Palo Verde Road home.

“She was spraying the backyard when she saw the neighbor’s tree go up,” he said. She grabbed their two dogs, Charley and Buddy, but Charley broke free and ran back into the house. Jennifer followed Charley but was stopped by flames swirling at their front door. Charley came back when Jennifer called, and they all fled to a nearby staging area.

By the end of the fire, all that remained of Murphy’s house was their flame-damaged RV and garage. The Toyota Camry that they’ve had two months was undamaged inside the garage. “How (the fire) moved and picked what it was going to do was unreal,” Murphy said. “I cannot figure out how that garage stayed standing.”

When the fire started, Cross was on vacation and cut off from the outside world – rafting the Colorado River in the Grand Canyon. He learned about the fire when regaining cellphone service Saturday morning – and praised the unity, quick action and safety focus of Bagdad employees and leadership.

“As much as I would have preferred to be there, there’s nothing that could have been done differently. I felt blessed knowing that we have great leaders that can step up and fill any perceived void,” Cross said. “My wife and I drove around town when we got back, and it was really difficult seeing the enormity of the loss and knowing it could have been much worse.”

Despite the destruction, the massive evacuation of the entire town and response by fire crews, not a single injury was reported.

“I’ve gained that much more respect and confidence in the team that we have to tackle any challenges that come our way,” Cross added. “These crises are when you get to see your culture. They can be divisive or unifying. This site comes together. There was no finger pointing or fault or misplaced outrage, rather reflection and support on what we need to do to go from here. It’s made us that much better as a community and property.”

Everyone involved knows the outcome could have been much worse without the collaboration and strong relationship Freeport-McMoRan has with Williamson Valley Fire District, the Bureau of Land Management and the Yavapai County Sheriff’s Office, said Graham Cooper, Concentrator Manager-Bagdad, who coordinated the site’s response efforts.

“We give our appreciation to the front-line responders of this crisis,” Cooper said. “BLM and the Williamson Valley Fire Department came through huge for us, in addition to our employees who threw everything they had at (the fire). We had water trucks from site here within 15 minutes to help. It was an amazing show of support.”

“My thoughts and prayers continue to be with those families impacted by the fire,” Olmsted said following the fire. “We will be sure to do everything we can to support those families as they work their way through processing this and dealing with the tragedy that they’ve gone through.”

Rallying around those impacted

Many employees impacted by the fire said they have been overwhelmed by the support they’ve received not only from fellow neighbors but also from the company as well as complete strangers. In addition to moving swiftly to rebuild the homes, the company arranged for counselors to assist employees struggling to cope in the weeks that passed.

A company also was brought in to help sift through the rubble, recover and decontaminate anything salvageable to help bring some comfort and closure for those who lost everything. In the ashes of Shiflett’s home, crews recovered turquoise jewelry which was delivered to his wife.

“It brought a lot of comfort because we went from having nothing but what I had in my pockets. It gave us some sense of being normal still,” Shiflett said.

The sense of community and neighbor helping neighbor has been inspiring to the entire company, Olmsted added.

“It’s been incredible to see the way that the local community of Bagdad has responded in terms of taking those folks in and helping support them,” he said. “It’s also been great to see how well the organization as a whole has responded. We had support offered from every site in North America. It’s another example of how well we all work together in times of need.”

Unfortunately, the fire response wasn’t the first for Bagdad. A year earlier, the Park Fire threatened homes and caused a similar evacuation.

In the weeks since the Spur Fire, the Williamson Valley Fire District has worked with Bagdad officials to reduce the threat of another catastrophic wildfire. In a recent conference call, Deputy Fire Chief Anthony Tunis said they’ve been working with residents to highlight the need for proper defensible space around their homes by cleaning up excess brush, tires and other debris that could fuel the next blaze. 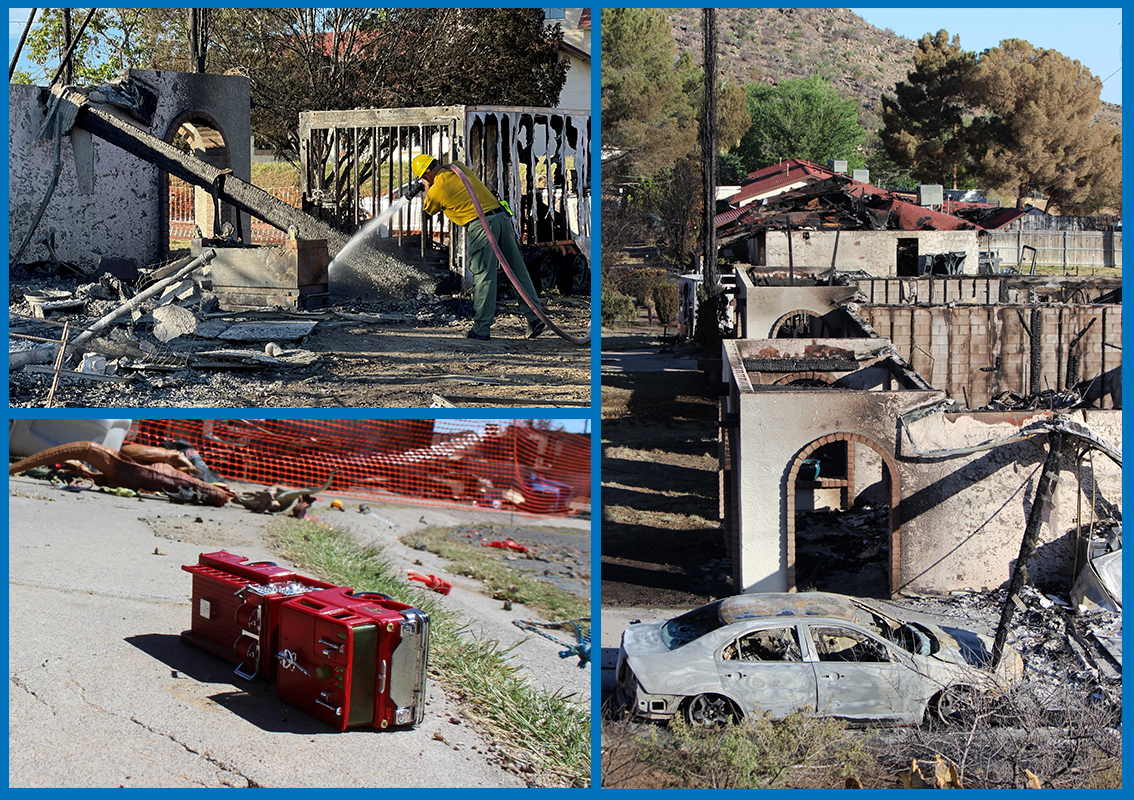 Photos (clockwise): A firefighter works to douse a hotspot following the Spur Fire. Multiple homes were reduced to rubble in the Spur Fire on May 27. A child’s fire truck sits on the sidewalk outside a house.